Relationship between the definitions of structure and building

“structure means any building, equipment, device, or other facility made by people and which is fixed to land; and includes any raft”.

As a result of the adoption of the RMA definition of structure in the Standards it is considered necessary to remove the link to structure in the definition of building, to enable moveable or relocatable ‘buildings’ that do not need to be fixed to land to be captured by the definition. Instead, we recommend the definition include a requirement to be “fixed to or located on or in land”. This will enable both shipping containers and relocateable homes to be included – but still retains a land based requirement. By land, we confirm this has the meaning in the RMA (and in the Standards) which includes land covered by water. Therefore where the definition of building refers to being fixed to or located on land, this also applies to any buildings fixed to land covered by water.

Contrary to those submissions that requested only one combined definition of structure and building, we consider it is useful to have separate definitions. This gives councils the ability to address either or both as required. In addition, regional councils are more likely to need to address structures separately from buildings and so the separate definitions allow for this. Feedback from a regional council pilot council requested that the definition of structure remain so that structures in the coastal marine area could be addressed.

In addition, as a result of removal of the reference to structure in the building definition many of the exclusions that are often included in council plan definitions of buildings (such as retaining walls less than 1.5m high) do not need to be excluded in the recommended building definition; they are not captured by the term.

Submitters identified that the two terms are circular in that each refers to the other as ‘building’ was part of the structure definition and ‘structure’ was part of the building definition. We agree that this is poor drafting and the removal of the interdependency has resolved this issue.

We recommend replacing the word ‘structure’ in the ‘building’ definition with the words ‘physical construction’. The two definitions work together now so that that any building that is fixed to land would be captured by the term structure but not all buildings may be structures through the recommended use of the term ‘physical construction’ rather than ‘structure’ in the definition of ‘building’. We considered other terms which could be applied instead of ‘physical construction’. We tested the word ‘facility’ with our pilot councils and they queried the meaning and certainty of that word. They sought clarity about whether some items such as shipping containers, caravans, motorhomes or house trucks would come within the meaning of the term. We consider that part of the uncertainty about that word relates to the fact that ‘facility’ may bear the meaning of a larger building or complex often used for a public or community purpose (eg, educational facility or community facility). We consider that the term ‘physical construction’ carries the meaning of a structure that is manmade and tangible, but it does not need to be fixed to land. While this is a new term, we consider that it is broad enough to cover all types of buildings without setting any parameters other than that there must have been some form of manmade construction. It will not be taken to exclude some items because they don’t qualify; as the word ‘facility’ may have been.

As referred to above, the removal of the word “structure” from the definition of building, decouples a building from the requirement to be fixed to land which is specified in the RMA definition of “structure”. This would result in vehicles being captured by the definition if no additional changes were recommended. The submission from Christchurch City Council raised this as an issue. We do not consider that in the common use of the term “building”, vehicles would be considered to be included. We consider that vehicles (or other transport modes like railway carriages or boats) that come and go and are used for transportation should not be covered by this definition. We note that the Building Act 2004 includes in its definition only those vehicles that are “immovable” and “occupied by people on a permanent or long‐term basis”.

RMA plans seek to manage effects from buildings in the main where those effects are more long term than from, for example, a car parked on a section and used every day. However, where those vehicles no longer move (likely no longer used for transportation but for activities such as business, storage or accommodation) we consider they would have similar effects as buildings and should be captured by the definition. We therefore recommend excluding motorised vehicles or any other mode of transport that could be moved under its own power. We considered the alternative to exclude vehicles where they are used for business, storage or residential activity – but given the fact that the definition applies to facilities that are located on land – the definition would then have encompassed any business vehicles or even trucks when located or parked on land. We consider it is more certain to only exclude those vehicles that can be moved under their own power.

Certainty – and what constitutes a wall or a roof or similarly enclosed?

Submitters identified that in some buildings (for example aircraft hangers and Nissen huts) walls are not clearly identifiable and their identification can be debated. Circular buildings may only have one ‘wall’ and with a dome roof this may not even be clear such as in the example below: 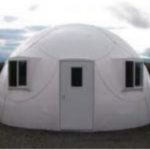 To avoid the problem of having to clearly identify the walls in the type of dome house example above the phase “or similarly enclosed” was included in the draft standard. This phase was opposed by submitters on the basis that it does not provide enough certainty. As a result the recommended definition has included the phase “is partially or fully roofed”. Consideration was given to excluding any permeable roof on the basis that this then would exclude crop protection structures from the definition. However, it was considered that any exclusion for a permeable roof could result in a loophole in the definition. Is a roof that leaks a permeable roof? How impermeable would it need to be to qualify? This could make it difficult for compliance and enforcement purposes. We consider that it would be better for the plan provisions (rather than the building definition) to clearly enable crop protection structures or other similar structures if this is the desired outcome.

Relationship with the Building Act 2004 definition of building

Relationship with definitions in other acts

A number of submitters sought the exclusions of buildings up to a certain size (and not always the same size). This can be addressed though rules that permit small buildings (eg, any building that does not exceed 10m2 in area or 2m in height can be permitted). We consider that this approach will make plans easier to understand and use. Any related bulk and location rules could also be drafted to exempt small buildings from having to comply with things like setback requirements or building coverage calculations.

Other submissions sought clarification about what is included within the definition and many items were referred to. We consider that these can be addressed in rules where required. We acknowledge that will require many rules but we consider that the broadness of the definition is inherent in the meaning of building and where councils need to address specific types of buildings or even parts of buildings such as decks, it is clearer for users if this is located in rules rather than hidden in a definition. On the issue of decks, if free standing and without a roof, they may be addressed within the definition of “structure”.

Implications for plans of changes

In relation to amendments to rules that may be required, we acknowledge the extent of these and in consideration of that issue we have provided extended timeframes for implementation to allow councils to implement changes within plan reviews, if desired.

In relation to the issue of whether a building is above or below ground, we recommend adding the phrase “fixed to or located on or in land” and this ensures that the definition does not differentiate between the two. Some buildings may be below ground and if councils wish to address these they may do so within their rules.

(a) partially or fully roofed, and

(b) is fixed to or located on or in land, but

(c) excludes any motorised vehicle or other mode of transport that could be moved under its own power.